mommyhood // a birth story for dandelion

But, for memory purposes, and for the love of the little things we'll start this birth story at Mass.

It was a Sunday like many other before but different in so many ways. It was different because it was the Sunday before the cesarean of all the unknowns was to take place. Our morning went well enough. Tantrums were had but we made it through as always and onto evening Mass we went.

Our cesarean was scheduled for Tuesday morning; 37 weeks plus four days. I was still slowly but surely coming to peace with this. I had many anxieties about this cesarean because of our placenta previa. Up to this point we had had two occasions of bleeding. The first occasion lasting one week and the second lasting a little over two weeks. We made it through those first two occasions, but our doctor mentioned that these bleeds normally come in three's and that the third one was the one to watch for.

Having made it to Sunday, I thought we were home free. An early morning cesarean after a full nights rest followed by a full day of rest and healing from the surgery was starting to sound very appealing to me. Being that it was Sunday, I thought we were home free and had dodged that third bleed. Like I said, peace was starting to settle and all was going to be well.

We went to Mass and had a very nice time. The boys were behaved (Magical, I tell you! There really was some kind of Holy Spirit goodness happening!) the readings were heard, the homilies were reflected on, prayers were had, and He was received. Throughout Mass, I was having contractions but I thought they surely were the non-threatening type. I did end up sitting through most of Mass, and I'm sure I got many a side-eye from onlookers, wondering if I was going to have a baby right there and then, but I really was feeling fine.

In fact, we asked friends of ours to dinner. It was the feast of St. John the Beloved who is our youngest Linus' patron saint. We love doing a little something special for the kiddos on those days. So dinner out it was and dinner out with friends was even more fun and special for our little guy.

Dinner was a delight. These friends have truly been a God-send throughout this pregnancy in so many ways. Little did they know they were going to continue to be God's helping hands to us in the hours to come.

After I stuffed my face with a grilled jalepeno burger with avocado and cheese + fries (Yes, you read that right...), we called it an evening and were on our way. While in the car, I told my husband how I had been having contractions during Mass and that I probably needed to rest once home. Rest I did and felt fine enough.

Fine enough to take this photo even and post it to social media. At the time, we had yet to decide on a boy name. It was seeming like an impossible task so I was throwing it out to the amazing communities that I'm blessed to be a part of. 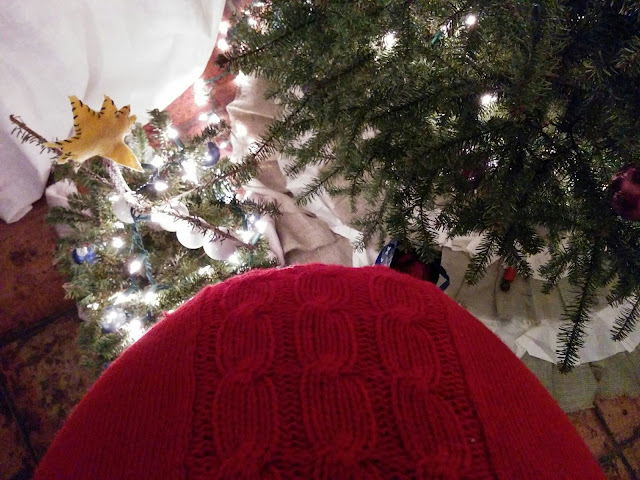 And, for memories sake, the boys were name-hoping for CooPoo, Babbbbyyyy, Kuno, Jesussss!, Dragonhorse, toilet, and Kuzco (We recently watched Emperor's New Groove...). Like I said, we needed help for a boy name. Girl's name was set, boys name was in major trouble!

The photo was posted and off to the shower I went to monitor our crazy monkeys that turn into sea monsters every. single. night. come shower time. Only, when I arrived, I was hit with a contraction that stopped me. The kind that you have to stay still for and just feel out. I promise it came out of no where!

Immediately I felt a pinch of panic which was quickly followed by a gush. The kind of gush that I thought we wouldn't need to worry about. The one that I thought we were going to avoid seeing how we were just a day or so away from having our planned cesarean. The gush that my obgyn had mentioned as the one.

The gush happened and was quickly followed by a large clot. The kind of large that kicked my phlegmatic self into monotone/non-panic/everything is going to be just fine, mode.

He knew. He knew in my voice that this was the kind of call you answer to with speed and presence. Into the bathroom he came, gave me one look, I said some words and discerning phone calls and next steps were quickly being processed.

Our poor sweet boys were swept from their shower. I know my oldest could tell something was not right but I tried my best to comfort him. I really did.

My husband was getting them dressed while I called our friend who we had just had dinner with. She knew and was at our door-front within 5 minutes. Literally.

I was too frantic inside my own mind to cry at her expediency and selflessness to just stop all that was going on in her late family evening to come tend to our kiddos so that we could high-tale it to the hospital. But, thanks be to God, she was there, and we were off.

All the way to the hospital I made my phone calls. Calling parents and siblings and another family friend to let them know that we needed their prayers and possibly their presence. I did a quick update on social media to plead for prayers and then we were there. At the hospital. Contractions, bleeding, and freaking out internally (because that's what I do).

We arrived at the hospital and quickly walked to the front desk of labor and delivery. We've done this twice before so I thought when I expressed all the red flag words the front desk person would have unlocked the doors and swept us into triage. After all, we were registered! annnnd we had a time-sensitive, potentially life-threatening situation going on. Instead we were met with,

Can you please write your name down? and other information?

I know you seem in a rush and anxious to get back there but that's why I'm entering everything myself. So please, will you fill out this paperwork so we can get you registered? You'll be taken back soon...

My shaking hand rapidly took the pen and filled out the paper...Here! It's all there!

Thank you! I'll be right with you!

I continued to emphasize our need for urgency only, she kept gently nodding her head as if everything was under control.

Only, it was not, said I internally, over and over again.

Honestly, I'm not one to leave people hanging but this birth story is getting lengthy so I'm going to leave you hanging. Thankfully, since I'm writing this, you all know all is well, but the moments that got to all being well were just nutty if you ask me.

Thanks be to God, He is bigger than nutty and crazy and even though I felt all was out of control, He knew that all was not. He had plans that were bigger than my heart could acknowledge in the heavy moments but in the lighter ones and with all my might you can believe I kept whispering every aspiration of prayer and trust known to my little heart throughout all the chaos and crazy.

So, we're going to leave it here. At me freaking out internally at the incredulous front desk lady who had not a worry in the world and obviously was not familiar with placenta previa.

Thanks for reading and I'll be back soon with the rest of His plans for us on that late late birthday night!

UPDATE: Off you go to Part Two and then Part Three!
Posted by Amanda at February 01, 2016
Email ThisBlogThis!Share to TwitterShare to FacebookShare to Pinterest
Labels: birth story, Mommyhood, Our little Dandelion, placenta previa