Cowboy Capital of the World - Part 2 of 3 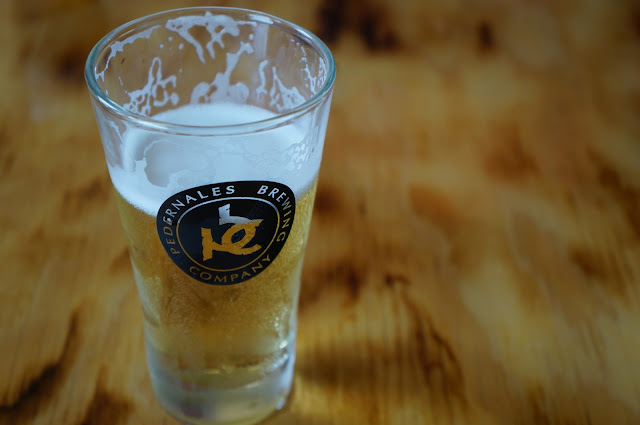 On Saturday, we made our way to Pedernales Brewing Company. Learn more about them here. They are a fairly new microbrewery that is located right near the enchanting little German town of Fredricksburg, Texas.

It took us a little under an hour to get to the brewery from where we were. I was somewhat worried about our little Linus since he absolutely hates the car seat, which makes traveling anywhere for any point of a time a challenge. Overall, I'm glad we went. It's always fun trying new beers and taking the tours that these places have to offer. Every one has a different story mixed with tons of passion. 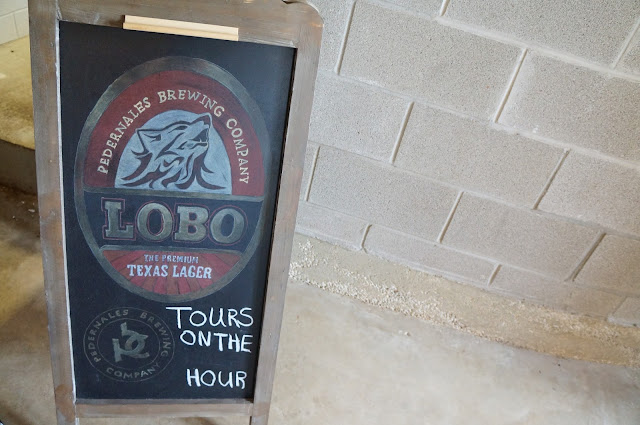 There were a few challenges upon arriving at this brewery. For starters, it was H-O-T! Not only was it hot outside and the tours are offered during the hottest times of the day, but it was hot inside the facility! I was a sweaty mess holding my sweaty of a mess children. The other difficulty was that Joseph did not nap. Not only had he skipped his nap on Saturday, but he also didn't nap the day before. Oye! The boy was running on adrenaline, new things, grandparents, his Uncle and Rebekah, and the hyperness that occurs when little tots try to fight off every inkling of drowsiness. 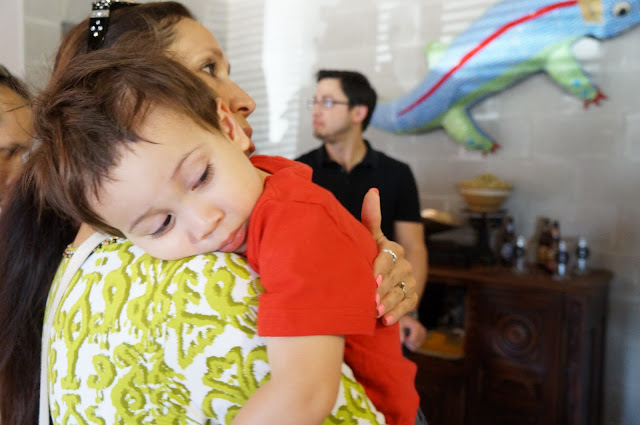 All things considered, with Joseph not napping, he did very well. He behaved better than I anticipated, but it also helped that there were so many eyes and arms to help coral the little guy.

Speaking of extra arms, these two lovelies joined the fun late Friday evening. Uncle A and Rebekah were with us. Joseph was ecstatic! He misses these two and all the fun energy they bring. We love them tons too and don't get to see them as often as we'd like. Which means we have to take it all in when we can! 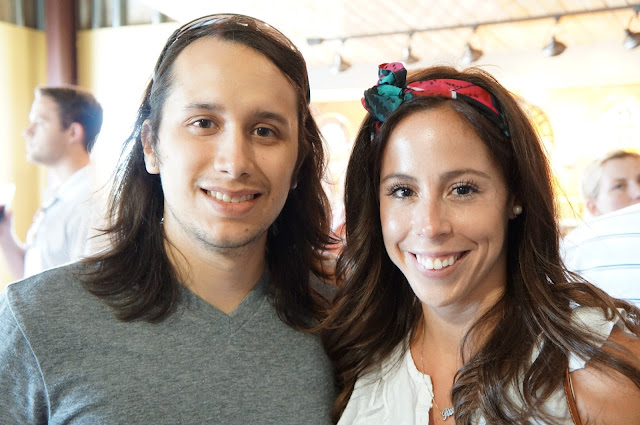 Our little Linus absolutely adores his big brother! I know I've wrote about this quite a few times, but I love it. It's adorable. It's all things sweet. I love watching the friendship they have. 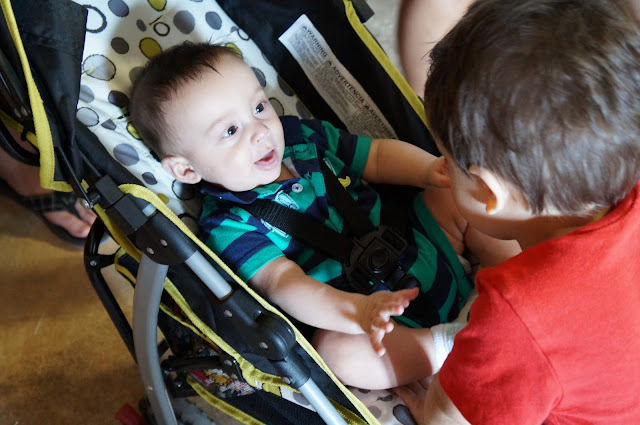 Joseph asks for his Bekah often! He loves her so much! She's always up for playing and has a beautiful energy to match our little monkey. 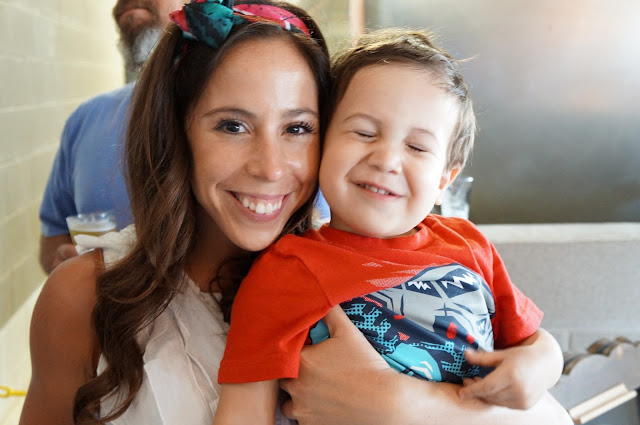 Both boys really enjoyed spending time with Uncle A. We were so blessed to be able to spend this weekend with him and Bekah! Uncle A, your nephews love you so much, just thought you should know. Joseph has been asking for you and Bekah since we got home. 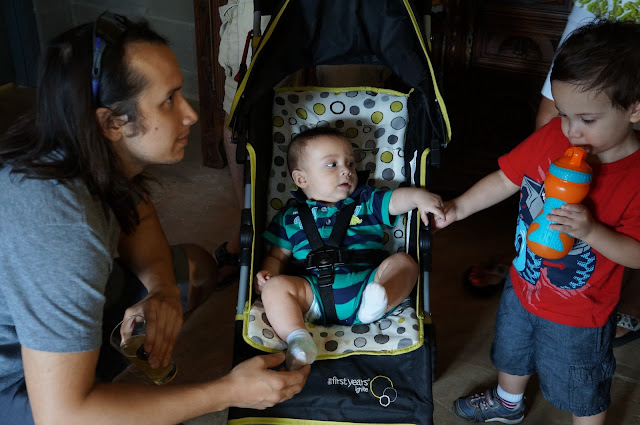 Below is a picture of our Bigfoot fighting his nap. The boy would run-a-muck around the small area provided in the front of the brewery. This small area was jam packed with poles, hard corners, and people that created a tricky running maze. All this was topped off with the incredibly hard and non-toddler friendly concrete floor. Good times watching our sleepy head toddling around with his head down. I can't tell you how many times I thought he was going to run straight into the door, wall, pole, person, etc. But, to his credit, he didn't. Way to be impressive, little man! 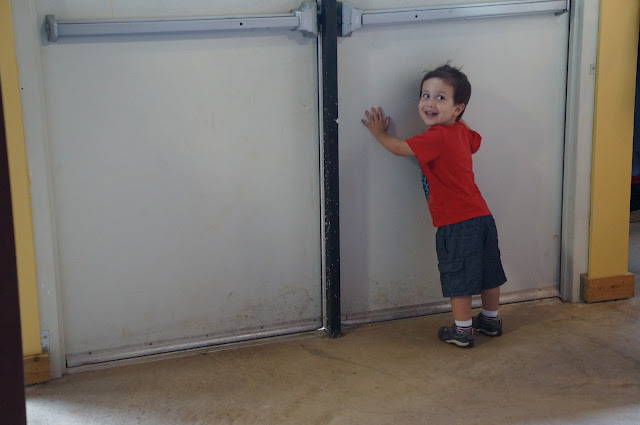 We got a family picture! Woohoo! Eli looks the coolest with his legs high up in the air. It's a talent of his. He was just trying to show off his ab and leg muscles. It's how he does. All in all, it's nice to get a picture with all of us. 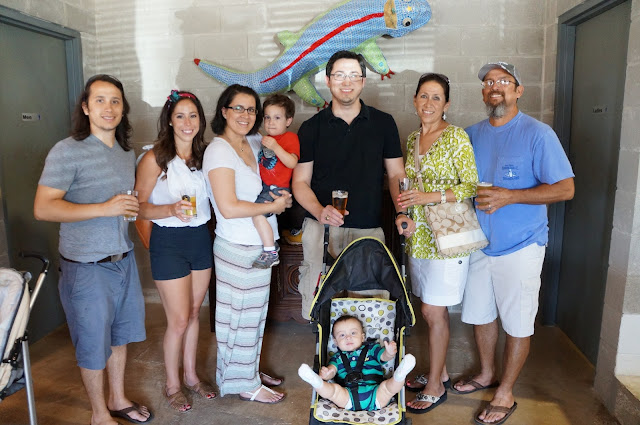 A successful day 2 afternoon took place! We loved it - despite the yucky, miserable, heat factor! And, to top it off, Eli actually did alright with the driving - miraculously! We went back to Bandera after having some tasty beer. Thank you, Pedernales! My favorite was the Lobo Negro, which was a Dark Lager Beer. Delicious!

Once we got back to Bandera, we finished the night off with some bar-b-que and swim time.


(Posting daily this week for the 7 Posts in 7 Days Challenge. Get on over to Jen at Conversion Diary to find others doing the same!)
Posted by Amanda at July 23, 2013
Email ThisBlogThis!Share to TwitterShare to FacebookShare to Pinterest
Labels: Bigfoot, Brewery, Brothers, Family, Fun, GeekMan, Grandparents, link-up, Linus, Uncle A